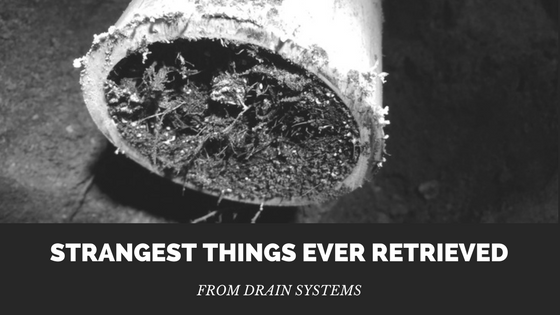 Ever encountered a blocked pipe scenario and tried using all your Do-it-Yourself expertise to unclog it? Most of us have tried it, of course with the thought that it’s possibly food remains, soap scums or hairs that caused the blockage.

Even though this happens to be the case most of the time, sometimes it’s not what you expected. We have come across some astonishing cases where we removed some of the craziest things we never expected would be in a pipe.

What’s your guess on possible things that can block your toilet or your drainage pipes? Whatever they are, the number of possibilities can get even stranger and horrifying! Let’s get started, shall we?

How can such a heavily built mammal like this fit in a drainage pipe? Well, it has happened before so don’t be amazed. Yes, that happened in Scotland where plumbers in their bid to unclog a sewer were amazed to find a live badger stuck. This was just part of a routine cleaning practice, which also turned out to be a rescue mission for the poor badger. Luckily, he was able to recover once retrieved from the sewer. In other parts of the globe, people come across strange animals, either dead or alive in drainages, such as snakes, fish, turtles and mice in their pipes.

Can you really recall what you did to your old undergarment? While some of us simply dispose of them like any other garbage, some people chose to flush their underwear down their toilets. It’s so dumbfounding why they don’t simply throw them away.

If that’s not surprising enough, check this out: a plumber in Ottawa County prison in Ohio’s Toledo, discovered some piece of convict pants in the drainage. The orange pants had been so stubborn, denying the poor plumber the chance to successfully execute his duty.

Another yet bizarre case was that of a plumber in Illinois’ Plainfield, invited to handle a blockage in business’ plumbing system. The plumber discovered a work out bra as the cause of the clog after cabling the toilet in the gentlemen’s restroom.

So many a times can a jewel fall into your toilet. But it never results into clogging, neither do you expect it to. But it’s not surprising to hear that plumbers were invited to retrieve a piece of jewelry from a toilet.

Yet another case, a grandmother at a restroom in an airport got her charm bracelet swallowed by the toilet after the auto flusher did its thing. She called out to the airport’s plumber to retrieve her $10,000 worth bracelet. The plumber detached the toilet out of the drainage pipe and retrieved the bracelet.

You’ve probably experienced cases of clogged drainage such as these, or even worst. Whatever the blockage situation may be, you can count on experienced plumbers from Kwik Plumbers to unclog it. We are just a call away!